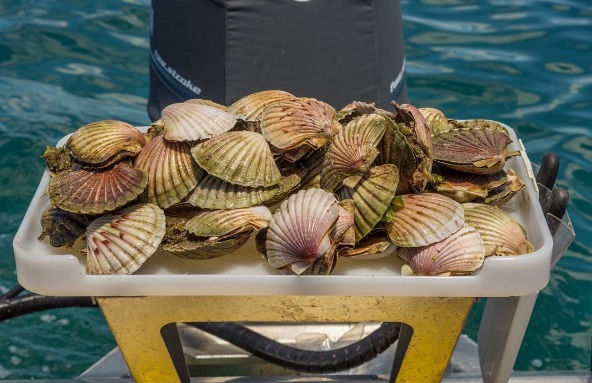 Scallops are edible bivalves similar to oysters and clams. They are found both in bay waters and in the sea. In terms of texture they are somewhat similar to white fish and have a fairly sweet flavor that is ideal for many different dishes.

Everything You Want To Know About Scallops

Clean, sweet and tasting of the ocean, scallops are considered a seafood delicacy by many people.  Rich in Omega-3 fatty acids and relatively low in calories, they are an incredibly healthy source of protein.  What I particularly like about scallops is they are very versatile and can be prepared in many ways, from simple searing and grilling to sautéing, deep frying, stir-frying, and baking.  I have even prepared scallops in soups, stews and risottos. Be sure to check out some of my favorite scallop recipes below.

What’s In A Name?

As with many delicacies, many stories and traditions have grown up around the scallop.  You may have heard the term “Coquille de St. Jacques.”  While this names a classic scallop preparation, it also translates to “St. James’ shell.”  St. James the Greater was a disciple of Jesus and is the Patron Saint of Spain.  Pilgrims traveling to his shrine carried a scallop shell with them to signify that they were making a pilgrimage.  At stops along the way on his pilgrimage, the pilgrim was offered what food he could scoop up in his shell.

The scallop shell is symmetrical and quite beautiful, and as such is often found in motifs both decorative and religious.  At some time, the scallop shell was linked with fertility, and it often shows up in classical art along with images of beautiful and desirable women.  A notable example of this is Boticelli’s The Birth Of Venus.

What Are Scallops Really?

It is nice to know a little history of the scallop as a symbol of pilgrimage and fertility, but what are they?  Scallops are bivalve mollusks.  This means that they have two shells.  Although the reproductive organs, or roe, are edible, the part of the scallop that most people in the United States eat is the adductor muscle that opens and closes the shell.

Some people refer to this muscle as “the nut.”  Unlike other mollusks that we eat, such as mussels and oysters, most species of scallops are free-swimming and can propel themselves across the sea floor several feet at a time by rapidly opening and closing their shells.

There are three kinds of scallops that are consumed in the United States””sea scallops, bay scallops and calico scallops.

Speaking of shape, size and color, the adductor muscle itself can range in color from pale ivory to beige.  Raw scallops are somewhat translucent and are generally round.  Large sea scallops might be up to an inch thick and up to 2″ in diameter, while bay and calico scallops, while shaped the same, are much smaller.

Scallops are lean protein, and as such, they can toughen very easily upon cooking.  It is very important not to overcook scallops as they can go from succulent to rubber ball pretty quickly.  Don’t take your eyes off them when cooking to make sure that you remove them from the heat when they are still moist, juicy and plump.

Grilling, sautéing, broiling and grilling are all simple, dry heat methods by which you can cook large sea scallops to really showcase them.  Moist heat methods including stir-fry (with sauce) and simmering (as in soups and stews and even risottos) are perfect for the small, sweet bay scallops.